I Have an Opinion! 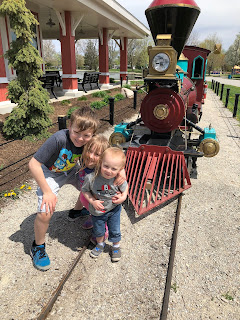 Having traveled to Lafayette, Indiana following Easter services this past Sunday, I'm enjoying some time with family in the town that, throughout the years, has become a sort of second home to me.  I also find myself spending a bit of time reflecting on two favorite things starting with the letter "B.": Bible and Baseball!


A couple weeks back, I shared a story about Major League Baseball umpire, Babe Pinelli (1895-1984).  During his rookie year as a baseball umpire in 1935, he was told NOT to call a strike on a certain other Babe (Babe Ruth), who was in the process of finishing off his baseball career with the Boston Braves.  Well, Pinelli did not see it that way and, calling Ruth out on strikes during a game, Pinelli was loudly booed at.  And that's not all!  Babe Ruth turned to him and said, "There's forty thousand people in this ballpark that know that was a ball, tomato-head!"  Yet, through it all, Pinelli kept his cool, and he responded to Ruth by saying, "Perhaps--but mine is the only opinion that counts."


James 1:19 says, "...Let every person be quick to hear, slow to speak, slow to anger..."  I will confess...I have not always been quick to hear (listen).  Perhaps some of that has to do with having wax in my ears.  However, a large part of it has to do with being "self-centered," rather than being "other people-centered."  And in the process, I find myself missing out on opportunities to represent Christ and minister to the needs of others.  Yet, in being "quick to hear, slow to speak, slow to anger" (displaying the fruits of the Spirit in my life by God's grace), I'm presenting a kind of love motivated by God's greater love for me that opens up the door to minister to the needs of others.  For where love is lacking, every word is viewed with suspicion, every action is liable to misunderstanding, and conflicts about - to Satan's perverse delight.  We see a lot of this today already?  Don't we?


Of course, in a world where everyone seems to have an opinion...God's TRUTH is what matters the most.  In Luke 24:6 the women who approached Jesus tomb where told by the angels, "egerthe" - "He is Risen!"  The most miraculous thing captured in a single Greek word!  And because Christ has risen from the grave, as Christians we have the promise of new life in Him.
at April 23, 2019
Newer Post Older Post Home

The Greatest Enemies of Confession and Absolution

Jonathan A.T. Vierkant’s Postings
Pastor Jon attended Concordia Seminary in St. Louis. He is also a Board Certified Chaplain through the Association of Professional Chaplains. Pastor Jon completed his year of vicarage at Trinity Lutheran Church in Wisconsin Dells, Wisconsin. In addition to serving parishes in Kansas and Indiana, Pastor Jon received his Clinical Pastoral Education training through Trinity Mother Frances Health System in Tyler, Texas. Pastor Jon served as the first full time chaplain at Concordia Village in Springfield, IL – a Lutheran Senior Services community based in St. Louis, Missouri. He also served as the chaplain and director of pastoral care services at the Lutheran Home in Arlington Heights, IL – a Lutheran Life Community based in Arlington Heights, IL. In addition to currently serving as pastor at St. Andrew Lutheran Church, Pastor Jon serves as a hospital chaplain at Froedtert West Bend and Froedtert Menomonee Falls. Pastor Jon and Katherine “Katie” were married in Lafayette, Indiana. They are parents of three children.